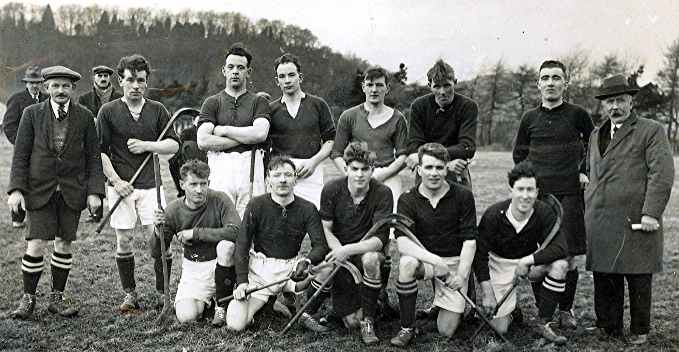 While researching the recent article on Shinty in Fort Augustus during a conversation with James MacPherson, who mentioned that he had a shinty team photograph of his grand uncle Jock McPherson, who sometimes went by the byname MacTavish.  James formally an  Aberdeen University Shinty player now back in his native Glenurquhart area, is a descendant of the Macpherson's of Killiechoilum. As his great uncle Jock  was for many years living in Fort Augustus, I was interested in seeing the photograph hoping that it would be a picture of a local Fort Augustus shinty team.  On receiving the photograph from James, I could not identify any of the players and neither could any of my Fort Augustus sources.  On further examination of the photograph along with James, we reckon that it was taken in Inverness at the Bught Park, as the background is identical to the Boleskine 1932 photograph which appears on the website.  There is a further similarity between the photographs, that the referee in both pictures is George Matheson Kirkhill wearing identical clothes.   Could it possibly be that the photographs were taken at the same time, prior to a  game between the Boleskine and Inverness teams.  Shortly afterwards at an Inverness shinty team game I approached several of the old Inverness stalwarts, Dennis Swanson, Louis Stewart and Malcom Fraser, unfortunately they could not positively identify any of the players or the team, as they were just on the young side and the early thirties was a bit  before their era.  The Inverness Shinty Club centenary booklet featured a couple of teams from the thirties, but though one or two faces looked faintly familiar to ones in the photograph, it was not conclusive just who the team where.  Several weeks later I attending a Lovat v Bute Shinty match on a summers day, who also should be watching the game but a couple of veteran Lovat players now in their late eighties and early nineties Addie Mackenzie and Eck Thow.    Eck and Addie confirmed the picture as Inverness Shinty team of the early nineteen thirties and identified the players in the caption above.  Investigations in the newspapers of the day came across a report of a Mactavish Cup district final  game at the Bught Park between Boleskine and Inverness on the 9th of January 1932, which featured all the players previously identified in the Boleskine 1932 picture.  With all this evidence it looks more than probable that this was a game at which the picture was taken, which ended in a victory for Boleskine by two goals to one. The other players listed in the newspaper report for Inverness are A J Macintosh, Hector Macdonald, J Nairn, R Macrae, G Grant, K Robertson and  R Munro. There are only 11 players in the picture and as no one appears to dressed in goalkeeping attire, it would be assumed that the goalkeeper is the player missing.  From the Inverness Centenary booklet , we know that  A J McIntosh played in goals for Inverness in the 1930 Mactavish final, but there was no one in the picture who looks like him .Though a query arises that Andrew Macgillivray was not listed in the Inverness team of that day, but sometimes there are mistakes made in team lines in the newspapers. The three other gents in the picture, the one in the soft hat beside the Inverness team looks to be associated with them, perhaps the two men in the rear were spectators just caught up in the shot .

It is a remarkable coincidence that the two photographs taken on the same day should eventually come together again.  I received a copy of the Boleskine one about 1986 from Duncan Macintosh brother of Roddy Macintosh and the other twenty two years later from James grand nephew of Jock Macpherson (James incidentally is the grandson of Roddy Macpherson ) .  Another coincidence is that there are three Macpherson brothers in the photos, two in the Boleskine team (Roddie & Angus) and Jock in the Inverness team .  The Macpherson family came to farm at Killiechoilun in 1929 from Ceannacroc in Glenmorrison they were a large family of 8 sons and 3 daughters.   Seven of the boys went on to play shinty for Stratherrick based teams, Roddy and Angus played in the early thirties for Boleskine.  Jock & Kenny played for Stratherrick before the Second World War. After the war, Hendry, Kenny, Jimmy and Wulstan turned out for Straths Athletic. Then Jimmy and Wulstan played for Boleskine when they reformed .

In more recent times  during the seventies Jimmy's sons, John, Peter and Hendry played for Boleskine. While in the late eighties early nineties Jimmy grandsons, Alexander, James and Steven Matheson turned out for Boleskine at juvenile level and Steven played senior level also .  This connection is carried through to recent times as another grandson of Jimmy's , Connor Macintyre was part of Boleskine's U12 British Legion Cup winning team of 2008.  Inverness have always been great rivals of teams from the Boleskine area, from the first  competitive match in 1898, the semi final of the inaugural Mactavish Cup between Foyers and Inverness till the present day.  Inverness by road is the closest shinty team to the Stratherrick area since the demise of Fort Augustus in the late sixties, there have been many epic contest between the teams over the years and many hastily arranged friendly have been played as either team required a practice game prior to an important match.   Inverness have never met any team from our area in a final, in early years we were almost always placed in the same district  section so we would have met in the early rounds of competition . Whilst in more recent times though with the open draws to cup competitions neither have reached a final together . The only game we have had where the the custody of a trophy was at stake, was the Mod cup final in 1984.  This is the Gaelic Mod  trophy for shinty, which is contested by the team from where the An Comun Gaidhealach Mod is based that year for a week and an invited team of the host clubs choosing .  In 1984 the Mod was in Inverness and we met the host club Inverness at the Bught Park on the 13th October.  Inverness carried the day by 4-1 with George Campbell scoring four goals including a penalty  for the town and  Ally Cameron countering for Boleskine. Inverness led by two goals to nil at half time. Boleskine had the upper hand for long periods in the second half, but a seventy fourth minute penalty scored by Inverness settled the home side. Though we scored four minutes later, a late goal by Inverness concluded the scoring . Boleskine's buckshee back Charlie Kennedy, was picked as man of the match .  After the game both teams retired to the Palace Hotel where a reception and meal was held, followed afterward by much socialising before the Foyers contingent left on the mini bus back home .

With teams in close proximity there is always a interchange of players between them over the years and this also occurred between teams from the  Boleskine area  and Inverness . In the 1984 picture Boleskine players Duncan Macdonald, Alan and Andrew Sumner had previously played for Inverness a few years before at Juvenile and Junior level, while Joey Smith and  Jim Chisholm played senior level for one season with them when there was no Boleskine team in 69-70 and  75-76 respectively . In the Inverness team, Kenny Cameron and John Macpherson (who incidentally  is Jimmy Macpherson's son) had  previously played for Boleskine and Peter Sloggie and Gordon Macdonald in future would turn out for Boleskine.     In the twenties Murdo Bethune and Duncan Robertson returned to play for Stratherrick after a year away playing for the town team, when they were working in Inverness. The Inverness team, in the  first round Camanachd cup match against Beauly in 1925-26 season included seven players from Stratherrick, as the Stratherrick club were unable to raise a team that year.  Duncan Fraser( Balochan ) of Gorthleck played for Inverness in the late twenties, because of the abundance of players for the newly formed Boleskine team .   Duncan returned to play and eventually be captain of his home team in season 1931-32. Also in the thirties  Colin Paulin  Hugh Arthur  John Maclean  turned out for the town side.   In the fifties Alan Macdairmid turned out for Inverness in the Lochcarron cup .

If anyone can identify the unknown players in the 1932 photo, possible names are given above in the article please send an E Mail  and we will update the  named players caption.